It's National Sexual Health Week and Pharma Nord has been investigating the concerns of women across the UK.

Women aged 16 and over were asked to answer questions about their sexual and reproductive health. The data gathered presents a clearer picture of what is impacting female health and wellbeing in the UK, with the aim of opening the channels of conversation.

Sexuality is an integral part of being human and it contributes greatly to an individual’s overall wellbeing. 82 percent of all women surveyed were sexually active.

When asked if they had suffered any sexual concerns, the most common response was a loss of sex drive or desire. Over 30 percent of women who had experienced this were aged 55 to 64, while 26 percent were between 25 and 34. It is clear that reduced sex drive can affect anyone, regardless of age.

The second most common sexual challenge was dyspareunia — a condition caused by medical or psychological factors that make sex painful due to vaginal dryness. Overall, it accounted for almost 42 percent of answers and was most common among women aged 45–54 and 55-64.

These age ranges accounted for over 50 percent of the women who said they have suffered from the condition. The disorder proved to be more common in women who had gone through or were showing signs of menopause. However, stress and medication for depression were also cited as causes.

Other conditions included vaginismus, which affects a woman’s ability to engage in any form of vaginal penetration due to involuntary muscle spasms. This accounted for nearly 10 percent of sexual dysfunction in the women surveyed.

It’s clear to see that many women face challenges with their sex lives, including loss of libido and discomfort during sex.

While wellbeing and mental health factors can significantly affect desire, maturing life stages also play a part in the natural progression of our sex lives. Challenges such as vaginal dryness, for example, are particularly common during the menopause.

For more information on the findings, view Pharma Nord's infographic. 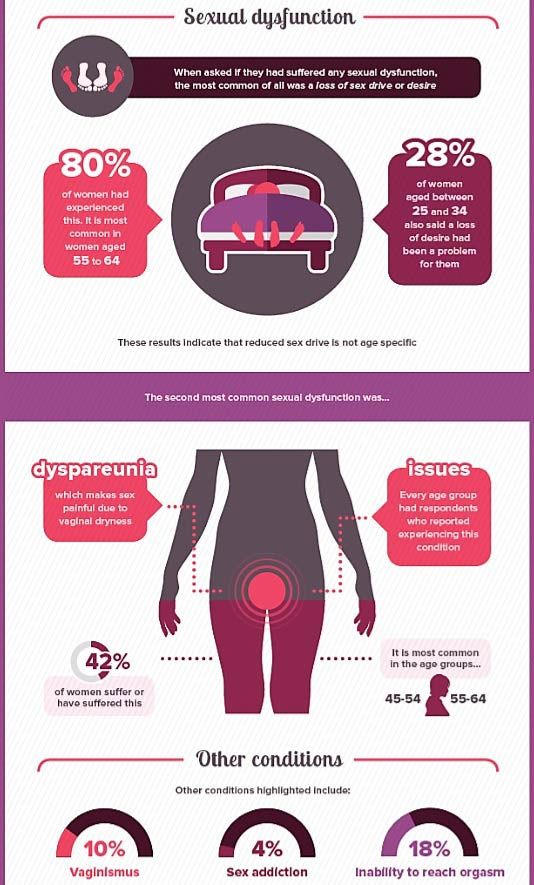