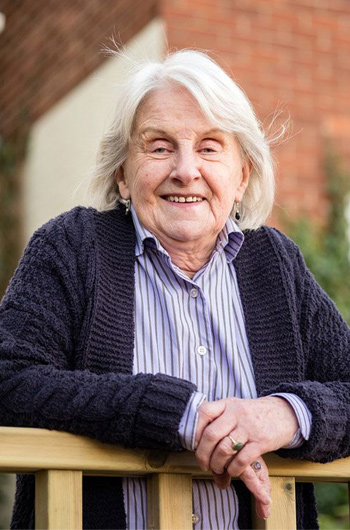 It was while attending a wedding that great-grandmother Diana Shepherd realised that the dry eye problem which had plagued her for months was really starting to affect her everyday life.

“It was winter time, it was raining, but I had to wear sunglasses all the time because my eyes were streaming that much and they looked so sore,” recalls Diana, 77.  I kept the sunglasses on, even during the reception, and people kept staring as they couldn’t understand why I couldn’t take them off.”

Diana’s dry eyes affected her in other ways.

“I couldn’t wear eye make-up as my eyes were so irritable and it made going to things like parties much more of a challenge and much less fun so it stopped me socialising as much. It stopped me from driving as well because I wasn’t confident I could see well enough with my eyes streaming. It was a real nuisance in so many ways.”

FIND OUT MORE ABOUT OMEGA 7 SBA24

It was quite a change for retired nurse Diana, who had been a very active, outgoing person before developing the problem.

“I’ve been abseiling, I’ve skydived from an aeroplane – I like a challenge!” she explains.

“I love walking but I found I was going out less and less because when I went out, I would have to keep wiping my eyes as they were so bad I could not always see where I was walking. Despite my nursing background, I didn’t know what was causing the problem and I always find that you don’t tend to think about yourself."

“I must have had it about 18 months before I went to the doctor who referred me to an ophthalmologist who said straight away ‘you have got severe dry eyes’.

Dry eyes can be caused by a range of things including prescription medication, ageing or exposure to blue light found in the sun, computer screens, mobiles, tablets and so on. What typically protects people from dryness is mucous membranes; tissues which help maintain bodily moisture via secretions and are found in various parts of the body, including the eyes. When under attack or irritation, mucous membranes respond with inflammation, hence the red, puffy and streaming eyes which Diana had been suffering from. But despite the diagnosis, things didn’t go smoothly at first, as Diana recalls.

“I had two different kinds of treatment, neither of which worked very well until my ophthalmologist recommended I try Omega 7 SBA24 capsules.”

FIND OUT MORE ABOUT OMEGA 7 SBA24
Made from the seed and pulp of the sea buckthorn berry via a unique extraction and purification process, Omega 7 SBA24 contains a range of naturally occurring essential nutrients needed to help maintain mucous membranes. Omega 7 SBA24 has been shown in clinical trials to have an anti-inflammatory effect on mucous membranes, reducing redness, swelling and streaming.

Diana, from Sheffield, admits: “I was sceptical to start with because I couldn’t see why swallowing capsules could help my eyes but when I read about the capsules and read through the instructions, I started to come round and thought it was worth trying.  After four weeks I started to feel the benefits – my eyes weren’t as red or swollen as they had been and they didn’t stream anywhere near as much as they used to. The improvement continued and I’ve now been taking Omega 7 SBA24 for three years."

“I’m back driving, I’m back walking, including hill walking every week with a group of friends and my social life is so much better. I do pilates and keep fit and I do a lot of sewing – I didn’t do that while I had dry eyes because I couldn’t thread a needle for a start.”

The transformation has also helped Diana to enjoy time with her family more – husband Michael and their three children, five granddaughters and six great-grandchildren.

“I spend a lot of time with my family but I like doing all sorts and now I can. I feel fine as long as I keep taking the Omega 7 SBA24 – it’s really made a difference to my life.”

FIND OUT MORE ABOUT OMEGA 7 SBA24

For more information on our Omega 7 SBA24 Sea buckthorn supplement please click here. Or to request a copy of our 16 page guide,  please contact us.