Selenium is an essential trace element that the human body uses to produce selenoproteins and selenium-dependent enzymes.  These substances are important for a wide range of functions in the human body including immunity, thyroid function and even healthy hair and nails.

Selenium enters the food chain via the soil, making selenium content in agricultural land an important factor in our own selenium intakes.  With low-selenium soil, crops that grow there and livestock that graze there, will also be low in selenium, contributing to low selenium status of local people.

Why do we need selenium?

Selenium levels in the soil naturally vary from country to country.  Areas such as Japan and (parts of) the USA may have high levels of selenium, while Europe and the UK are selenium-poor.

A recent analysis of UK statistics shows that selenium intakes in the UK are significantly low, with 50.3% of women and 25.8% of men consuming less than the lower reference nutrient intake (LRNI), which is not enough for good health 1.

Additional studies show that vegetarians/vegans are more likely to be deficient in this essential nutrient 2, 3.

Selenium is a trace element that, via the amino acid selenocysteine, produces selenoproteins - important molecules with impressive properties. These include:

- Glutathione: one of the most important antioxidants.

Not only does selenium protect our cells from damage, but it also helps regulate thyroid function (which determines our metabolism), healthy sperm, immune function, and healthy hair and nails.

Thyroid function – The thyroid gland is an important hormone-producing gland in the body.  Its main role is to regulate our metabolism - the rate in which our cells and organs operate and consume energy.

The thyroid produces several hormones, including thyroxine (T4) which converts to the more active triiodothyronine (T3).  The selenoprotein Iodothyronine deiodinase is needed for this conversion, a lack of which may result in thyroid dysfunction with symptoms such as tiredness, depression & weight gain.

Fertility & Pregnancy – Selenium contributes to normal spermatogenesis (the process in which sperm is made), supporting male fertility. In a 2009 study, men receiving 200 μg of selenium daily had significantly increased total sperm count and motility compared to those taking a placebo 5.

Selenium may also support female fertility and improve the chances of conception in couples opting for IVF treatment.  Studies also show that selenium may decrease symptoms of postpartum depression, and a particular study (known as SPRINT) conducted in the UK showed that SelenoPrecise reduced the risk of pre-eclampsia, a condition that can cause raised blood pressure and seizures in pregnancy 6,7.

Protection from Mercury and BPA plastic  – A biological toxin found in seafood, industrial pollution, and amalgam fillings, mercury can negatively impact the nervous, digestive, respiratory, renal and immune systems.  Selenium helps protect from this, as it binds to mercury in the body, forming a new, non-toxic substance which can easily be excreted.

When combined with vitamin E, selenium has shown evidence to reduce the effects

of bisphenol A (BPA) plastic exposure, including oxidative stress and liver issues.

humans (including binding to oestrogen receptors).

Selenium in the soil is inorganic but is converted to an organic form when absorbed by plants and animals (such as crops and livestock).

Only organic selenium such as SelenoPrecise contains the amino acid L-selenomethionine, an important compound used to make selenoproteins and therefore, human health.

In addition to l-selenomethionine, SelenoPrecise contains more than 20 other organic selenium compounds with each type of selenium offering different benefits to human health.

Most selenium supplements are in an inorganic form, such as selenite or selenate.  Studies show that only approximately 50% of the selenium gets absorbed by the body from these sources.  Selenoprecise, however, demonstrates a standard 88.7% absorption 8. 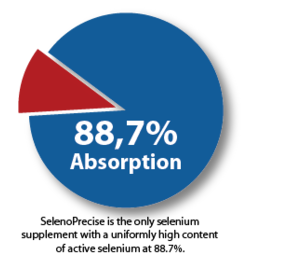 For a selenium supplement to be effective, it should be rich in the amino acid l-selenomethionine, as this is used to make selenoproteins which offer health benefits.  In supplements, this amino acid can deplete, making the supplement ineffective.  Selenoprecise is stable so its nutritional value does not vary throughout its shelf life 9.  This stability is the main reason why SelenoPrecise is used in scientific studies and research projects worldwide. 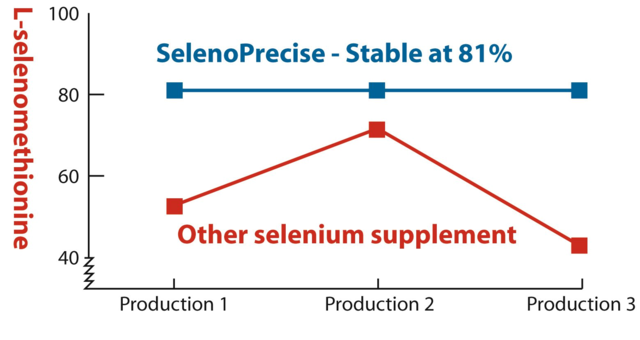 Featuring all the benefits of Bio-SelenoPrecise, Bio-Selenium + Zinc is a comprehensive complex containing important antioxidants, including the mineral Zinc and vitamins C, E, and B6.  This combination of antioxidant nutrients ensures that the entire cell is protected from oxidative stress produced by pollution, UV rays and even our own metabolism.

2.Turner-McGrievy G, Barnard N, Scialli A, Lanou A. Effects of a low-fat vegan diet and a Step II diet on macro- and micronutrient intakes in overweight postmenopausal women. Nutrition. 2004;20(9):738-746.

9.Selenium‐enriched yeast as source for selenium added for nutritional purposes in foods for particular nutritional uses and foods (including food supplements) for the general population ‐ Scientific Opinion of the Panel on Food Additives, Flavourings, Processing Aids and Materials in Contact with Food. EFSA Journal. 2008;6(7).