How too much sugar is damaging our children

Two recent reports have spelt out in detail how damaging too much sugar can be for children.

Recently The Daily Telegraph spoke about official data from the NHS and how it has revealed that childhood obesity rates in the UK are soaring with more than one in five children classed as obese by the time they leave primary school.

Rates of severe obesity have also reached a record high - with a rise of more than a third in just over a decade. In total, 4.2 per cent of children leaving primary school are now classed as “severely obese” - compared with 3.2 per cent in 2006/7 - and just 0.4 per cent in 1990.

The Royal College of Paediatrics and Child Health (RCPCH) has called the trends "totally unacceptable" while the Government has pointed to the action it is taking to help address the issue, particularly the sugar tax which makes it more expensive for manufacturers and consumers to buy sugary drinks and food.

FIND OUT MORE ABOUT OUR BLOOD SUGAR CONTROL RANGE

Another report in The Sun newspaper notes how too much sugar can have a long-lasting effect on children’s behaviour.

Scientists in Italy and Israel asked more than 100,000 children aged 11, 13 and 15 how much they drink as well as indulge in behaviours such as fighting, smoking and bullying. They found those who consumed the most sugar were 78 per cent more likely to misbehave with sugary drinks seemed to trigger more bad behaviour than sweets and chocolate.

Cutting down on the amount of sugar we eat can be a challenge for adults, let alone children with sweets, fizzy drinks, cakes and biscuits always a temptation.

Bio-Gluco Control can help to cut down on sugar consumption and break the snacking cycle. 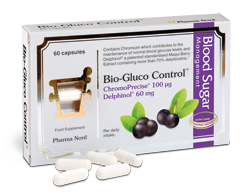 A supplement which can be taken safely by children as well as adults, its combination of ingredients works in a double action to slow the uptake of glucose into the bloodstream and then speed up its removal from the bloodstream.

The result is that, when taken regularly as part of a balanced diet, Bio-Gluco Control can help to smooth out the energy highs and lows associated with snacking and cut down on cravings for sugary snacks between meals.

As seen in The Daily Telegraph and The Sun.