In a somewhat untraditional yet rather inspiring study of Bio-Vitamin D3, scientists have succeeded in raising blood levels of vitamin D, a nutrient that is of great importance to muscle function. As blood levels of Vitamin D in a group of men went up, so did their activity level

When the dark time of year approaches and the sun is no longer powerful enough to enable Vitamin D synthesis in the skin it can easily affect people’s activity level.

Therefore, a group of scientists wanted to see if they could somehow get some sunshine “into the cells”, so to speak, by giving supplements of Vitamin D to a group of male volunteers at Sand Ridge Secure Treatment Center in Wisconsin, USA. 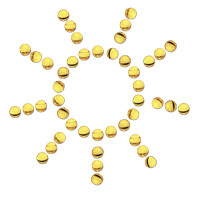 er unconventional study. They were randomly assigned to either a daily Vitamin D supplement (Bio-Vitamin D3 from Pharma Nord) or identically-looking capsules with inert olive oil.

It was not just the content in the capsules that was different. The scientists observed a significant difference in Vitamin D status in the participants, depending on what type of intervention they got.

The study lasted from the beginning of January until the end of May. Blood samples taken before and after the study clearly showed that the Vitamin D was absorbed very easily in the body. Levels of Vitamin D in the blood increased substantially in the volunteers that took Pharma Nord Bio-Vitamin D3, whereas it decreased markedly in the volunteers in the olive oil group.

The importance of Vitamin D

There was also a distinct difference between the two groups with regard to physical activity level. The Vitamin D-treated men were much more physically active than the men in the other group, and those with the highest levels of Vitamin D in their blood were also the most active.

The scientists mention that several factors can affect your vitamin D status. For example, overweight and obese people often have lower levels of the nutrient in their blood which maybe because Vitamin D tends to bind to fat tissue. Not surprisingly, a measurable reduction in BMI was observed among the men that trained most intensively and they even lost weight.

Important Vitamin for the muscles

In the study that is published in the science journal Nutrients, the scientists refer to physical activity as “one of the most resilience enhancing strategies for both physical and mental health.”

What they do not mention, however, is the very relevant fact that Vitamin D helps maintain normal muscle function. It is therefore very likely that the improved Vitamin D status has had a positive impact on muscle health.