Pycnogenol (Pic-no-gen-ol) is made from the bark of French maritime pine with the Latin name Pinus pinaster. Pycnogenol is made by extracting the outer bark of the pine and is then standardized to a 65% content of the active plant substances known as procyanidins.

The trees are cultivated in a 2.5 million acre plantation in the Southwestern part of France. All trees that are cut down are replaced with new saplings, making the entire production fully sustainable. The forest is unspoiled and natural, with no pesticides, no herbicides.  Pinus pinaster  is not subject to seasonal variations, unlike other plants, which makes it an ideal botanical source.

Each of these actions stand alone or work in unison to support a wide range of potential benefits as shown in research.

Hay-fever and other allergens

One in three people suffer from allergies; which are an overreaction of the body’s immune system toward substances it considers harmful, such as dusts, mites and animal hair.  Hay-fever describes an allergic reaction to plant pollen and is one of the most common triggers of allergic reactions.

When a person who is allergic comes in to contact with one of these allergens, immune cells known as mast cells release the tissue-hormone histamine. The histamine in turn triggers sneezing, nasal congestion, coughing, wheezing, itching and bronchial swellings.

According to studies, Pycnogenol was found to inhibit the release of histamine from mast cells that were aggravated by an irritant 1.

Pycnogenol may significantly contribute to the improvement of some risk factors of cardiovascular disease, including regulating blood pressure and platelet function and improving lipids (fats) in the bloods.

Also known as an enlarged prostate, BPH is common in men as they age, especially in those over 50.  When the prostate (a small gland near the bladder) becomes enlarged, it places pressure on both the bladder and urethra, leading to various symptoms including difficulty urinating.

In one study 4, Pycnogenol was shown to be statistically superior to both placebo and medication (dutasteride and finasteride) after 8 weeks in improving urine flow, decreasing urine frequency and improving the ability to fully empty the bladder.

In various studies, athletes have shown an increase in endurance while supplementing with Pycnogenol compared to placebo.  In these studies Pycnogenol has shown to improve blood flow and oxygenation of muscle, allowing them to work harder and resist fatigue 5. 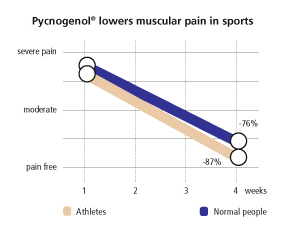 Long periods of immobility, decreased fluid intake and water loss in dry compressed airplane cabins are contributing factors of swelling due to insufficient blood circulation, with fluids accumulation in tissues throughout the legs. Most people will notice the effects of in-flight swelling if they take their shoes off and have difficulty getting back into them at the end of the flight. Leg and ankle swelling can lead to dangerous conditions like Deep Vein Thrombosis (DVT).

Pycnogenol enhances generation of nitric oxide (NO) which supports the relaxation of the blood vessels, allowing more blood to flow to the skin.

Pycnogenol binds with skin proteins collagen and elastin to help support skin elasticity and structure.  In research, those taking Pycnogenol supplements daily over 12 weeks experienced significantly increased collagen (type 1) production by 41%.  This in turn can contribute to reduction of wrinkles and fine lines 8.

Pycnogenol supplementation also improves production of hyaluronic acid, the compound responsible for skin hydration, with one study showing a boost of up to 44% after 12 weeks. This benefit was particularly noticeable in the skin of subjects who had dry skin prior to the study 8.  Other mechanisms of Pycnogenol which can support healthy-looking skin include improved microcirculation and increased antioxidant protection from environmental factors 9, 10.

Pycnogenol is shown to inhibit the activation of the main inflammatory complex in the body, Nf-KB 11.  This action reduces the activity of compounds in the body which trigger inflammation and negatively impact joint conditions, such as arthritis. Pycnogenol use in clinical trials has also demonstrated reduced inflammation and joint pain in arthritis sufferers 12,13.  Those taking Pycnogenol supplements also produce fewer MMP enzymes, compounds responsible for degrading joint cartilage.

Lifestyle, diet and hereditary factors all impact our vision, with age causing vision to naturally decline over time.  The retina specifically is exposed to high levels of oxidative stress when the eyes are exposed to UV rays from the sun which can damage the delicate tissue.  This oxidative stress can be counteracted by effective antioxidants and numerous studies show Pycnogenol demonstrating this beneficial action 14, 15.   Pycnogenol also helps protect delicate retinal capillaries which play a role in healthy vision by ensuring good optic blood flow.