Fish oil must first be converted into free fatty acids before it can be absorbed by the human body. This conversion results in some loss of fatty acids. When you take fish oil as free fatty acids, you get 50% better absorption. This allows you to achieve the same effect with fewer capsules.

Omega-3 is described scientifically as ‘essential’, meaning the human body is unable to produce it. We simply must obtain omega-3 fatty acids from the food we eat or the supplements we take.

Some of the healthiest diets in the world  (including Japanese and Mediterranean) feature regular consumption of oily fish.  Scientists first became aware of the link in the 1970s, when Danish clinicians discovered that Eskimos had exceptionally low rates of heart disease and arthritis, despite consuming a diet high in fats 1.  It was then discovered that particular essential fatty acids (which we commonly refer to as omega-3) found within oily fish were to thank for these benefits.

Omega-3 levels are very low in land animals; oily fish (including salmon and mackerel) are good sources.  In times when consuming these regularly becomes a challenge (due to cost or dislike of seafood), supplements serve as an ideal, practical solution.

Fish oil is one of the best-researched nutritional supplements available with thousands of strong scientific studies supporting fish oils safety and benefits. EPA and DHA are beneficial in a wide range of systems around the body.

EPA & DHA are preferred by the body as they can be immediately used, whereas omega-3 from other sources (such as nuts and seeds) must be converted several times within the body, which is an ineffective process.

Fish oil works primarily through eicosanoids - fat-based signalling molecules which dictate how much inflammation the body will produce in response to physical stress, such as oxidation or inflammation.  Fish oils encourage an anti-inflammatory response which, in turn, is associated with the reduction in risk of various diseases/ ailments.

Most omega-6 fatty acids (found in poultry, eggs, cereals and vegetable oils) are inflammatory by nature when consumed without adequate omega-3 to counter-balance them. Many experts agree that we should be at least balancing the amount of omega-6 we consume with omega-3 (a 1:1 ratio) to help reduce inflammation.

250mg per day of DHA (as found in fish oil) contributes to the maintenance of a normal brain function.  A wide array of clinical evidence supports the use of fish oil supplements in a range of mental wellbeing conditions, including depression 2.

A high proportion of brain tissue is made up of DHA and EPA, which are important both in forming the structure of brain cells and helping them communicate with each other. Low levels of DHA and EPA may affect concentration and mood in adults, and have been linked to learning difficulties and behavioural problems in growing children 3.

A meta-analysis from the Journal of the American College of Nutrition concluded that fish oil demonstrates a ‘significant antidepressant effect’ on a range of depression diagnoses including post-natal depression and major depressive disorder 4.  In additional research, supplementation with omega 3 fatty acids has also been shown to reduce impaired cognitive function (such as memory issues) associated with ageing 5.

Having elevated levels of homocysteine in the blood (hyperhomocysteinemia) is associated with fatty build-up in the arteries and stiffening of blood vessels, which may lead to blood clot formation, heart attack or stroke.  Elevated homocysteine may also be associated with the development of Alzheimer's.

Other factors thought to raise levels of homocysteine include a poor diet, smoking, diabetes, arthritis and high consumption of diuretics such as coffee or alcohol.

Omega 3 fatty acids are also important in the normal functioning of the immune system, suppressing the production of inflammatory compounds in the body 8.  This anti-inflammatory effect has shown benefits in research with sufferers of certain joint conditions.

A 2010 meta-analysis of studies concluded that fish oil significantly reduces symptoms of rheumatoid arthritis, including joint stiffness and pain.  The analysis also concluded that due to fish oil, the need for medication (such as non-steroidal anti-inflammatory drugs) was decreased 9.

Omega-3 supplementation has been shown to reduce symptoms of attention-deficit hyperactivity disorder (ADHD) when compared to placebos.  Studies also report that fish oil supplements were shown to be safe and tolerable in children 10.

Omega 3 fish oils in the special free form present in Bio-Marine are assimilated and utilized by the body significantly better than both triglycerides and ethyl esters, used in other fish oil products 11. 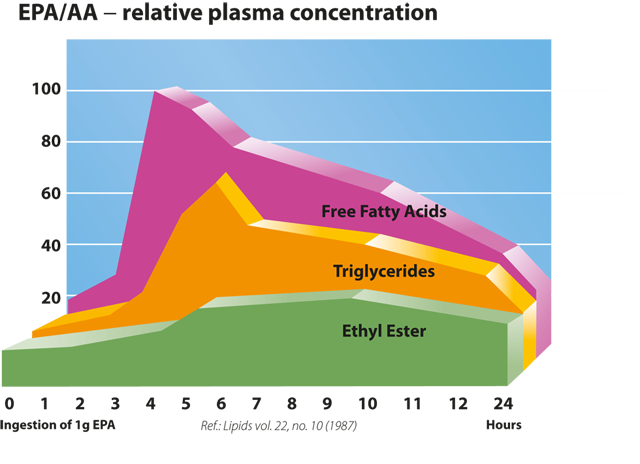 The fish oil in Bio-Marine Plus demonstrates a very high level of purity as the oil has undergone a three-step refining process, where the oil is thoroughly cleaned. One of the world’s leading technologies is used for screening and removing unwanted particles like pesticides, heavy metals, furans (highly toxic waste particles from industrial burning) etc. This means that the content of several of these potentially harmful compounds may be far below the official threshold levels approved for fish and fish oil products.

The fact that the oil in Bio-Marine Plus is very clean was confirmed in a survey of pollutants in a number of fish oil products made in 2018 12 at the request of the independent Danish consumer organization TÆNK. The study found the following extremely low pollution values:

Mercury (Hg): at least 95% below the EU permitted content of mercury.

Dioxin: 98% below the EU allowed limit on dioxin and dioxin-like PCBs.

Equivalent of 4-5 oily fish per week

A Finnish study that was published in a scientific journal 13 demonstrated that people who consumed Bio-Marine daily had the same health benefit as those who ate a fish meal four to five times per week.

Bio-Marine Plus is encapsulated in an oxygen-free environment and has an extremely low peroxide count due to the fact that the oil is effectively protected against oxidation.  When oils are oxidized, they lose their nutritional benefits and become unpleasant and ‘rancid’.

3. Long-chain omega-3 fatty acids and the brain: a review of the independent and shared effects of EPA, DPA and DHA

4. Martins J. EPA but Not DHA Appears To Be Responsible for the Efficacy of Omega-3 Long Chain Polyunsaturated Fatty Acid Supplementation in Depression: Evidence from a Meta-Analysis of Randomized Controlled Trials. Journal of the American College of Nutrition. 2009;28(5):525-542.