Garlic (Allium sativum) is a bulbous plant originally from Central and South Asia which has been used as food and medicinal herb for thousands of years. Garlic contains a wide variety of active substances which can generate health benefits, making it a popular dietary supplement.

Supplementing with garlic exposes us to higher levels of its active compounds than dietary garlic and,  in turn, can provide a range of potential benefits. Garlic supplements can:

Garlic contains a range of bioactive compounds with one in particular named alliin. When exposed to the enzyme alliinase, the alliin is converted to allicin. This process takes place when garlic is physically disturbed, such as cut, sliced, chewed or digested.

Within the gut, allicin generates a variety of fat and water-soluble sulphur-containing compounds, many of which may offer benefits to human health such as supporting the circulatory system or supporting immune function.

In various trials, garlic supplementation has been shown to reliably lower high blood pressure. The compounds present in garlic support the relaxation of blood vessel walls (an action known as 'vasodilation') by releasing the natural substance, nitric oxide. This relaxation widens the diameter of the blood vessels, reducing blood pressure as a result. Garlic has also been shown to reduce the activity of angiotensin I – an enzyme the body uses to elevate blood pressure.

Cholesterol describes a substance responsible for transporting fats around the body. Too much cholesterol is detrimental to cardiovascular health, as it may contribute to the development of a fatty plaque in our blood vessels known as atherosclerosis. This plaque also builds up over time due to age, dietary habits or genetics.

Atherosclerosis build-up narrows the blood vessels (raising blood pressure) potentially causing the plaque to rupture. Should this happen, the blood may clot to try to heal this wound, which may result in an entirely blocked blood vessel. The end result could be starving important organs of oxygen such as the heart and brain, known as a heart attack/stroke respectively.

Garlic has been shown to reduce the production of endogenous cholesterol – the cholesterol that the human body makes itself. It does this by reducing the activity of enzymes responsible, including squalene monooxygenase. In doing this, garlic can reduce our total cholesterol levels, which may reduce the build-up of fatty plaque.

When LDL cholesterol becomes oxidized (which can occur when exposed to environmental free radicals), it dramatically contributes to atherosclerosis.

The active substances in garlic supplements are able to reduce total cholesterol and LDL while increasing HDL, improving the overall cholesterol make-up of the blood. The substances have also shown evidence of preventing the oxidation of LDL cholesterol, reducing the potential damage it may do 2.

Garlic was famously used as a first aid tool in World Wars 1 & 2 as a wound disinfectant. This is due to garlic demonstrating a wide range of antimicrobial actions, which include fighting off bacteria, fungi and viruses. These microbes (small organisms) are also known as pathogens, as they have the ability to cause disease.

Garlic has been shown to fight against pathogens such as:

Garlic is able to do this by stimulating the production of a wide range of the body's natural immune cells 3. Garlic has demonstrated the ability to reduce the duration of illness while reducing the likelihood of becoming ill in the first place 4.

Most randomized controlled clinical trials that demonstrate the efficacy and safety of garlic have used whole extract formulations, such that used by Bio-Garlic.  Garlic products focusing on allicin content alone neglect the 30+ other bioactive compounds within garlic shown to have a clinical effect.  An aged-garlic extract is suspended in ethanol for 1-2 years, rendering it unable to produce any allicin – an important garlic compound. 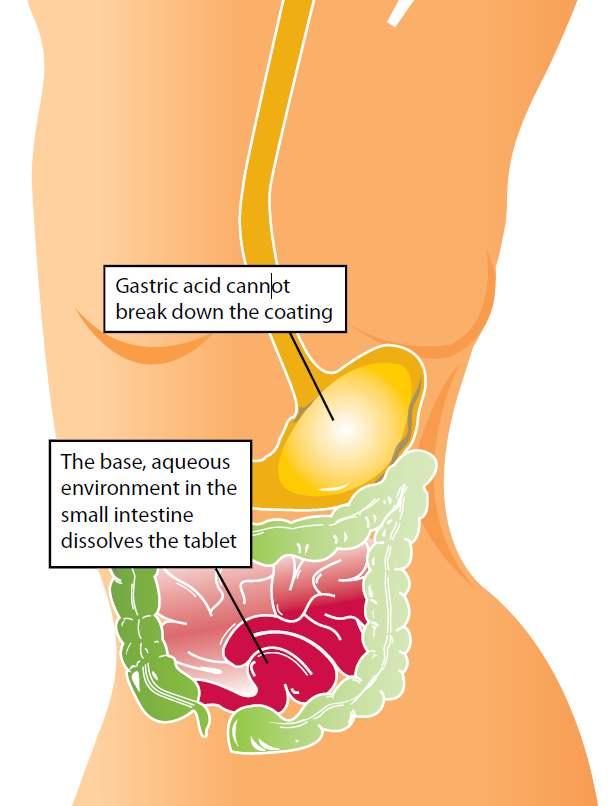 Bio-Garlic is protected from stomach acid by a special enteric coating. This ensures that the tablet passes through the stomach intact to protect active compounds from damage by stomach acid before their subsequent release and absorption in the small intestine.

The coating  also helps ensure that volatile compounds are not released too early in the digestive tract, which would otherwise result in a strong odour.

Illustration: Bio-Garlic is protected from stomach acid by its special enteric coating.