Chromium is an important mineral that contributes to normal blood sugar levels.  In addition, chromium supports biological processes involved in metabolism of carbohydrates, fats, and proteins.

Supplemental chromium is known as trivalent chromium, whereas industrial chromium (used for  fixtures in bathrooms or motorbikes) is known as hexavalent.

Sugar balance is important to maintain for good health.  Sweet cravings caused by blood sugar imbalance encourage consumption of sweet, sugary foods to temporarily increase blood sugar and remove the sweet cravings.  This 'quick fix', however, will quickly result in a blood sugar crash and return of sweet cravings. In the long run, such cravings for sugary foods may have a negative effect on health, including contribution to various disease states, including diabetes, obesity and cardiovascular disease 1.

After a meal, levels of glucose (sugar) rise in the blood as it is absorbed from our food in the gut.  It's dangerous, however,  for too much sugar to circulate in our blood at any one time, primarily because sugar can combine with various parts of the body, leading to glycation which is harmful to human health.  The human body prevents this by releasing insulin, a hormone which triggers removal of sugar out of the blood and into cells (such as our muscles) which can use the sugar for energy.

If we consume too much sugar, the body will release larger quantities of insulin to remove the sugar faster, which can often cause the rebound effect of having too little blood sugar. 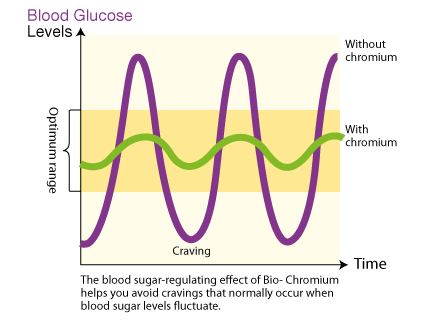 Chromium works by becoming part of the molecule chromodulin (previously known as glucose tolerance factor or GTF), which supports the use of insulin in the body by making our cells 'sensitive' to it.  The overall result is that less insulin needs to be produced and blood sugar will balance gradually, preventing low blood sugar and sugar cravings. 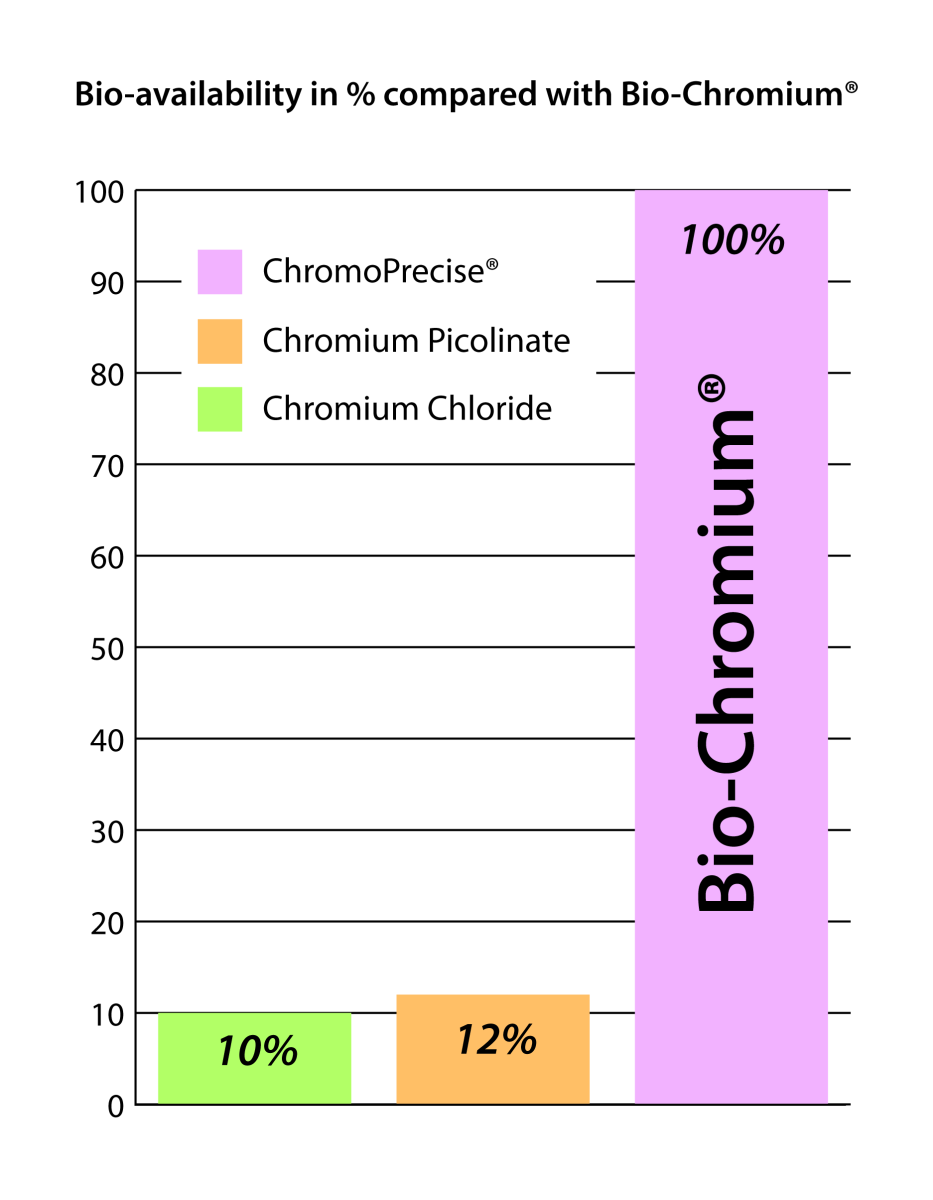 Chromium has demonstrated an ability to decrease cravings for certain food groups in research. In one particular trial, chromium supplementation was able to reduce carbohydrate cravings and overall food consumptions in patients with atypical depression (of which food cravings is a common symptom) 3.

In Europe, ChromoPrecise™ (in Bio-Chromium) is the only organic chromium yeast that has been approved by the European Food Safety Authority to control blood sugar levels. The chromium yeast has been tested in several published studies, and its high level of bioavailability, purity and safety has been documented.

The chromium used in Bio-Chromium is organically bound meaning it is bound to yeast and natural amino acids. It has an excellent bioavailability in the body ensuring that it is up to 10 times more absorbable than other approved sources of chromium4.

4. Scientific Opinion on ChromoPrecise® cellular bound chromium yeast added for nutritional purposes as a source of chromium in food supplements and the bioavailability of chromium from this source. EFSA Journal. 2012;10(11):2951.