Bio-Calcium+D3+K1+K2 is designed as a comprehensive bone care complex, containing key vitamins and minerals with research supporting their roles in healthy bone formation.

Bones consist of living tissue that is constantly being replaced. The bone-forming cells are called osteoblasts and the bone-degrading cells are called osteoclasts. As bone tissue also functions as the body's calcium storage facility.  It is particularly important that we absorb sufficient calcium in the bones. If the body gets too little calcium, the osteoclasts are activated which breaks down bone tissue to cover the body's need for calcium.

It is important that you get enough calcium, vitamin D and vitamin K during the years when your bones are developing. Children and young people increase their bone mass because the osteoblasts are more active than osteoclasts up to the point where the bones reach their peak mass (usually around the age of 30 years). It's been called “building a bone bank.” After reaching this peak mass the amount of calcium lost from the bones will exceed the amount stored, causing a net loss of bone mass (about 0.6% per year).

As shown in the following illustration, women are more exposed to loss of bone mass than men. Research shows that women who are treated with estrogen are not necessarily in less need of calcium. 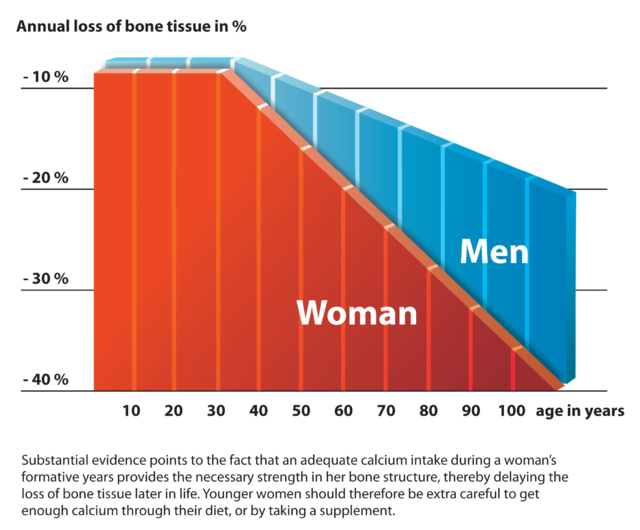 What is vitamin D?

Vitamin D is a fat-soluble vitamin that is available in several forms, of which D3 is absorbed most easily in the body. Vitamin D contributes to the maintenance of normal bones, teeth and muscle function.

Vitamin D is in fact a pro-vitamin, as we are able to synthesize it in our skin when we get exposed to sufficient amounts of sunshine. However, at latitudes such as in the UK, the sun is only high enough in the sky for us to produce vitamin D from May to September.

Health authorities recommend Vitamin D supplements to children, pregnant women, dark-skinned children/adults, veiled women (and others who wear garments that cover most of the body), and to individuals who rarely or never get exposed to sunlight. In addition, nursing home residents and people over the age of 70 are advised to take vitamin D as a means of protection against brittle bones.

What is vitamin K?

K-vitamin is a fat-soluble vitamin important for the maintenance of normal bone tissue, through supporting the activation of a protein called osteocalcin.

A natural source of vitamin K1 are dark green vegetables. Some vitamin K2 is produced by our intestinal bacteria and dietary sources of vitamin K2 are rare.

Vitamin D increases the intestinal uptake of calcium from the gut, but also induces the synthesis of osteocalcin. Osteocalcin is responsible for depositing calcium into the bone matrix (via the bone-building osteoblast cells) but must be activated by vitamin K before it can achieve this function. Without adequate vitamin D3 and vitamin K, calcium is less likely to ever reach the bone structure.