Ginkgo, also known as Maidenhair Tree, originates from Southeast Asia. For centuries, extract from the leaves of this tree has been used for therapeutic purposes. This tree, which is not related to any existing tree species,  has existed for 240 million years.

Ginkgo biloba makes it possible to improve the blood flow in the brain and other vessels around the body, supplying cells with more oxygen and nutrients.

As demonstrated in many clinical trials, ginkgo biloba may offer therapeutic benefits to various conditions tied to poor circulation including tinnitus, Raynaud's syndrome and intermittent claudication.

Ginkgo biloba contains a number of active substances, with the main ones being:

Terpene lactones have a number of effects on blood, including inhibiting platelet aggregation and blood clot formation.

Thought to be caused by sensitive blood vessels that cause poor circulation to the extremities, Raynaud’s syndrome (also known as Raynaud's phenomenon) is typically characterized by cold and painful hands and feet, even at relatively mild temperatures.

Ginkgo biloba is traditionally used to relieve the symptoms of Raynaud's and has been shown to lower the number of attacks in clinical trials, versus placebo 1. One proposed mechanism for this effect is Ginkgo's ability to boost circulation and delivery of warm blood to the hands and feet.

Bio-Biloba supplementation specifically has been shown to elevate the temperature of cold hands.

Without Bio-Biloba: After 10 minutes the skin temperature increases from 12.6 to approx. 20°

After using Bio-Biloba: After 10 minutes the skin temperature increases from approx. 13.8° to approx. 30.9° C

Tinnitus can be exceptionally irritating to the sufferer, often characterized as hearing noises that aren't actually present in the environment. These noises include buzzing, humming, hissing or ringing. It's not clear what causes tinnitus, but is believed to be multifactorial with poor circulation to the ears being a possible cause.

Ginkgo biloba is traditionally used to relieve the symptoms of tinnitus and has shown to be an evidence-based treatment option when using a standardized supplement 2.

In one clinical trial featuring 333 people with dementia, those taking a standardized ginkgo biloba supplement for 24 weeks experienced improved cognitive functioning, decreased aggression, depression and anxiety 3. In a similar study in those without a dementia diagnosis, a standardized ginkgo supplement taken daily over 3 months was able to improve cognitive function and reaction times compared to placebo 4.

One of the main proposed actions for this benefit is that Ginkgo is able to improve circulation to the brain, improving oxygen and nutrient delivery throughout the busy organ 5.

Various studies show that Ginkgo biloba supplementation can reduce symptoms of intermittent claudication, caused by poor circulation in the legs which causes pain and tiredness (especially in the calf muscles) when walking.

Intermittent claudication is known as a symptom of peripheral arterial disease (PAD), a common condition usually caused by a build-up of fatty deposits (atheroma) in the walls of the leg vessels.

A meta-analysis found that Ginkgo biloba supplementation decreased the symptoms of these conditions, including the ability to walk greater distances without experiencing tired and painful legs 6.

When taken in combination with certain medicines, Ginkgo biloba may support recovery after a stroke. A recent study demonstrated that the combination of aspirin and Ginkgo biloba supplementation improved recovery rates of those who had suffered from an ischaemic stroke, versus aspirin alone.

The major study involving 348 patients who had experienced an acute ischaemic stroke in the previous week, took either aspirin (a common medicine advised after a stroke) or a combination of both aspirin and Ginkgo biloba 7.

Bio-Biloba offers the only fully THR licensed ginkgo biloba tablet produced under pharmaceutical standards on the UK market. This stands as an unmatched sign of quality and safety, as the risk of contamination from other herbs is exceptionally low (a common issue for herbal supplements).

Bio-Biloba is standardized to levels of active compounds found to show human benefit in clinical. This extract is based on 24% flavone glycosides and 6% terpene lactones.

A Dutch study of 21 Ginkgo biloba products concluded that Bio-Biloba is the purest product on the market. 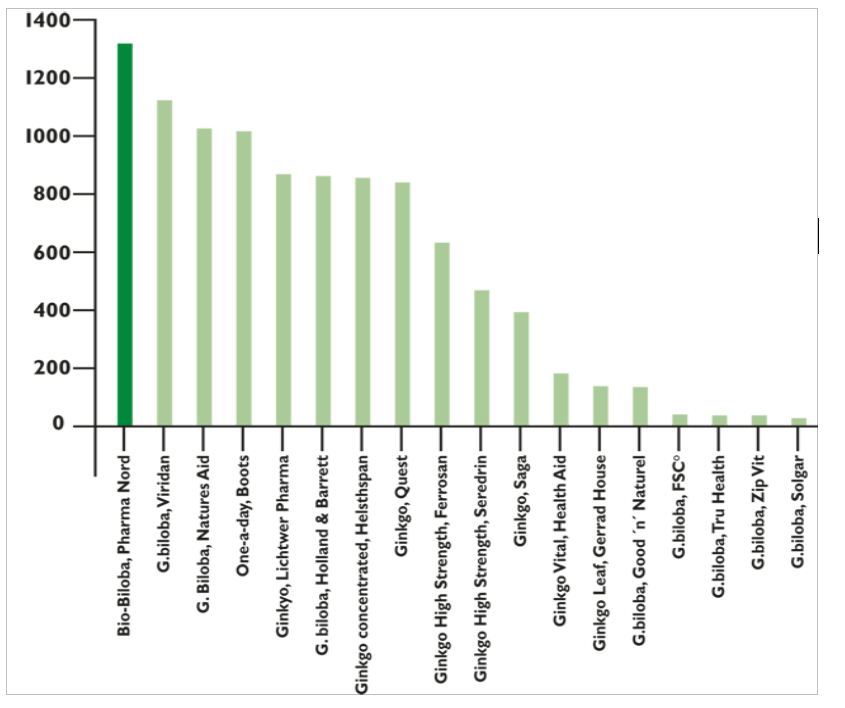 2.von Boetticher A. Ginkgo biloba extract in the treatment of tinnitus: a systematic review. Neuropsychiatric Disease and Treatment. 2011;:441.

6. Pittler M, Ernst E. Ginkgo Biloba extract for the treatment of intermittent claudication: a meta-analysis of randomized trials. The American Journal of Medicine. 2000;108(4):276-281.