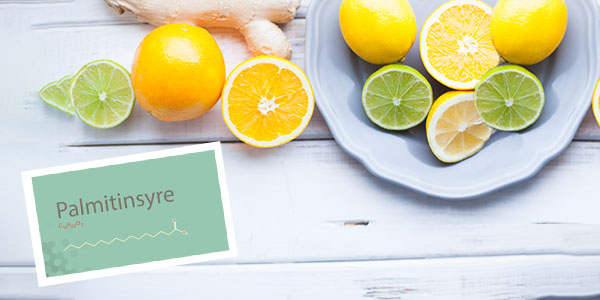 Ascorbyl palmitate may also be called Ascorbyl stearate or Fatty acid esters of Ascorbic acid. It is vitamin C which is both fat and water soluble. This is done by combining vitamin C with saturated palmitic acid or with stearic acid (ascorbic acid esterified with palmitic acid). After ingestion, the compound is broken down into ascorbic acid and palmitic acid, after which it is absorbed into the bloodstream.

The fatty acids used in ascorbyl palmitate can be derived from both animals and plants.

Ascorbyl palmitate can act both as an active ingredient in supplements or as an excipient with E-number 304. It is also widely used in creams and lotions.

Ascorbyl palmitate has the predicate GRAS (Generally Recognized As Safe) by the FDA, the US Food and Drug Administration. That is, the substance is considered "generally safe to use"